When I first heard about London Spy, I was told it “started slow,” which I took to be a lukewarm review. Therefore, I selected it as my “taking a break” show on a busy day, to avoid getting into something that would eat my afternoon.

And that was the end of that day.

London Spy may take its time to hook you. It may keep you off-balance, as you search hard for the twists and hidden truths that you assume are just waiting to pounce, but when it takes off, it goes. This is a show that draws you in to a vast, unknowable world, and keeps you every bit as off-balance as it keeps its protagonist (the incomparable Ben Whishaw, in what I would call a “career-making role” if I hadn’t seen any of his other work), leaving you breathless and wondering who to trust. The way the story leaps between heart-wrenchingly sweet romance and helpless despair is both crushing and addictive. And on this show that is constantly pulling the rug out from under you, only one thing is certain: Love. The rest is probably tapping your phone.

But London Spy isn’t just a thriller. It’s a show with something to say.

The story begins with two men who are very easy to slot into fairly common gay stereotypes: the drug-addled party boy, Danny (Ben Whishaw), and the buttoned-up white-collar closet case, Alex (Edward Holcroft). However, the romance that soon blossoms between them is so real and so deep that it is almost painful. And when Alex goes missing and eventually turns up dead, Danny’s world implodes when he discovers that Alex was a spy, and that he himself has been implicated in his lover’s murder by a vast conspiracy.

The core of the story, the love the two men shared, is what anchors it even when the plot seems to be spinning out of control. No matter what lies Danny is told, how well they are sold, or what evidence is provided, he is not fooled. The genuine intimacy that he shared with Alex informs his intuition and gives him the clarity to see through all the bullshit that descends upon him. The effect of this is that the only reference point the audience is given to navigate this hugely uncertain story is the mutual love shared by these men. We have to believe in the reality, the depth, the truth of this love, or we can’t believe in anything.

And speaking of things not to be believed… 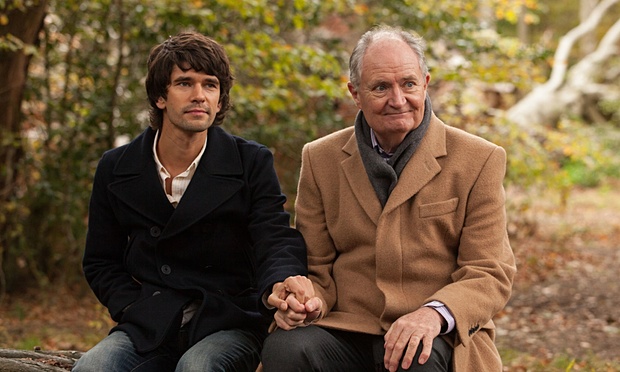 There is a wide distrust of Scottie (Jim Broadbent) in the discussions I’ve seen surrounding this show, and there should be. Everyone and everything should be viewed with suspicion in a conspiracy this vast. However, I find myself inclined to believe him. Danny, after all, is our narrator, and his intuition so far has been spot-on. If he trusts Scottie, then I feel inclined to follow suit. Scottie himself is a fascinating character, and he’s also our window to the slightly more veiled message of the show.

Scottie lived as a closeted gay man in an extremely homophobic era, working for an especially homophobic organization. He expressed his true self once, and he was suppressed by that organization. And instead of fighting back, he gave in to it, and let it rob him of happiness for years. Now he sees the same thing happening to Danny, perpetuated by the same people, and is no longer content to give up and let the Powers That Be have their way. Through Scottie’s past and Danny’s present, this show is able to pull back the curtain on the ways that people in both the LGBT and BDSM communities have been persecuted for decades in the media. After all, when Alex turned up dead and Danny began insisting that Alex was murdered, the first thing the conspiracy did was to create a false portrayal of their relationship as being Sado-Masochistic and use Danny’s sordid past to discredit him, even going so far as to possibly infect him with HIV in order to make him appear more “disreputable.”

But here’s the thing. We know Danny has a history of drug use and anonymous hookups. We also know that he is a person, sweet and loving and deeply wounded, and 100% deserving of love and of justice. We know that he has HIV (or at least, that he tested positive in one clinic. Whether that is real or another deception remains to be seen), but we also know that his HIV status does not make him in any way disreputable or undesirable. And it doesn’t make him wrong about Alex. Two things are (perceived at this point to be) true: Danny has a history of drug use and unprotected sex with strangers. Danny has HIV. We, the audience, clearly see that there is no connection between these two conditions, or that he didn’t “deserve” the second by engaging in the first. But we understand how the public will perceive it, and we know that the conspiracy’s plan will work, because, more than likely, it has worked on us in the past.

How many times have we felt for someone going through a tough time in the media, only to subconsciously rescind a bit of that sympathy when we discover that there are “tawdry” details to their sex life? How can we not see that this plan to keep the public from clamoring for a more thorough investigation into Alex’s suspicious death will work, when we understand that if we didn’t know Danny so well, it might have worked on us? And this is where the hidden power, the progressive message, of London Spy really comes out. Because if Danny and Alex really HAD been engaging in kinky sex, and even if Danny really HAD contracted HIV when he was partying irresponsibly, it wouldn’t matter. The love they shared was real. The justice and sympathy that they deserve, they deserve completely. When the media reduces this murder to an accident in a kinky gay sex-attic, the reality of Alex and Danny’s relationship doesn’t change. If Danny can be HIV positive and still absolutely deserving of a normal, happy life with the person he loves, then couldn’t that be true of anyone who is HIV positive? If Alex and Danny can be slandered in the media as “perverts,” but still be deeply sympathetic characters in the context of their whole relationship, then couldn’t anyone who is accused of enjoying kinky sex (true or not) also be a human being with dignity and context that hasn’t been considered, and an unalienable right to be treated with respect? If it infuriates us to see Danny dismissed as some irresponsible deviant who deserves what he gets, then shouldn’t we find it intolerable when anyone is thought or spoken of that way?

By unfairly subjecting Danny to this slander, London Spy is able to show us the sort of cruelty, judgment, dehumanization and ostracism that our own prejudices make possible. We are able to see this kind of scandal from the side of the victim, and understand that it is our own cultural willingness to see people in the LGBT community, the BDSM community, and people living with HIV/AIDS as “wrong,” “other,” or “lesser” that allows these sorts of injustices to exist. It’s not only a twisty and highly intelligent thrill-ride, it also challenges the world to be a better place, to learn from past mistakes, to see all people as human beings, and to wonder what their story really is.